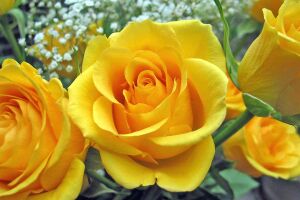 Peggy Eileen Wessel, 82, passed peacefully into the arms of Jesus January 25th,2021 at Worland Healthcare & Rehab Center after a long and courageous battle with breast and ovarian cancer.  Peggy was born August 14th, 1938 at the Greybull hospital to Ralph Elmer and Sylvia May Garbutt Reed.  She joined her sister Alice and brother Donald.  Later, sisters Linda and Nancy added to the family.  They farmed in northern WY.   She worked hard in the fields. A favorite pet was her desensitized skunk.  After an accidental escape, a skunk was seen crossing the field.  Her father encouraged her to go catch it… she found out it was not her skunk!  Peggy attended schools in Greybull, Manderson, Casper, Cody and graduating from Worland in 1956.

She talked often about working as a carhop at the Worland A&W drive-in on their opening night.  They were extremely busy and cars were parked every which way.  She later took a position with Farmer’s State Bank.   She married Richard Gray in 1960.  To this union 2 daughters were born, Jo Ellen and Diana.  Richard passed in 1976.

Peggy worked at the Chamber of Commerce in Worland.  She was chosen for the Big Horn Mountain Women of the Year pack trip.  She enjoyed the Tennessee Walker horses describing them as if “riding in a rocking chair”.   They visited many of the beautiful lakes as they camped through the week.

She later purchased McGarvin’s Jewelry and began a career in retail, later changing the name to Country Living & Gifts.  In 1985 Peggy and Clint Wessel married and worked together in the store for many years.  They were blessed to celebrate 35 years of marriage this past August. In December they were able to celebrate Clint’s birthday together as well as a movie date while both living in the Nursing Home prior to Clint’s passing Dec 17th 2020.

Peggy enjoyed tending to her beautiful flower beds, cooking “you should have some”, and decorating.  She loved Word Chums and any games with family, especially a very competitive pinochle game.  Her doggies were special to her providing much joy and companionship.  Peggy cherished her cousin outings, family reunions and time with her sister Alice.  She followed politics closely, on the Trump Train, and also rooted for her New York Yankees.  She called Altuve a “Mad Little Bull” when he beat up on her Yankees.

She loved spending time in the mountains and most of all cherished time spent with family.  She was very proud of her grandchildren and traveled with Jim and Jo to most of their events.  She was so full of joy and enthusiasm and had a very robust and contagious laugh.  She will be dearly missed.

Peggy was a member of Zion Evangelical Church, Today’s Homemaker’s and Gorgeous Gals.

The family would like to thank Worland Healthcare & Rehab Center for the tender care they provided and Pastor Dobson for his compassion and words of encouragement.

Should friends desire, memorials can be made to Zion Evangelical Church, New Hope Animal Shelter in Worland or any charity of your choice.

Clinton Howard Wessel, 84, passed into the arms of Jesus December 17th, 2020 in Billings. He was born on Dec 9th, 1936 to John and Ina Hampton Wessel. He was later joined by 3 sisters, Norma, Violet and Lucy.  His mom, being a Hampton, was 1 of 12 kids so there were plenty of cousins to get in trouble with.  By his own admission he was an ornery kid.    He told of a time when he was little he went over to a big parking lot full of cars near his home and walking through taking the valve caps off of tires.  When his pockets were full he went home.  He got caught.

His father was a blacksmith with his shop right beside their home.  John Wessel was known far and wide for his skills.  Many of his detailed wrought iron creations can be found around town and at Hamptons Mahogany Butte ranch south of Ten Sleep.   Many of Clint’s uncles were farmers and ranchers and they would take their turn trying to keep Clint out of trouble. Uncle Bud was one of his favorites because he would let Clint drive the tractors.  Clint and cousin Sam Hampton grew up together and were like brothers.  When you got the two of them together in the later years they could tell stories for hours.

Clint joined the Air Force at age 17.  He became a mechanic, being very good at it with sharp attention to detail.  He was entrusted to work on the planes of the famous Thunder Birds.  One of the top pilots would request that Clint had the final check over of his plane.  Clint shared of the time that early in his career he went up in a jet with one of the pilots. The pilot asked if he wanted to take over the controls.  Clint said sure.  The jet instantly darted, dived and swerved.  The pilot yelled “take it easy Clint, this ain’t a piper cub”!  In another flight Clint was thrilled at going Mach 1.  Later, as technology increased he was able to go Mach II.  Clint picked up the sport of golf while in the Air Force and was very, very good.  He traveled all over the world with the military and he said when the top brass found out he was a top notch golfer, they would arrange schedules to play with him.  He played golf at many big tournaments and his scrap book was filled with his many wins.  While he was stationed in Germany he married a sweet little German girl named Christine.  Together the couple had 2 daughters, Barbie and Trish who he loved dearly.  Clint retired from the Air Force after 20 years while living in Las Vegas.  The couple later divorced and Clint moved back home to Worland.

In 1985 Peggy and Clint Wessel married and worked together in the in Country Living for many years. Clint learned the trade of jewelry repair and entertained their many customers with his endless supply of jokes.  Clint enjoyed driving beet truck for Sage Creek Land & Cattle at harvest time and kept the crew wondering what he was going to say next.  Clint always had a smile on his face and a warm greeting.  He did not know a stranger.  Clint and Peggy were blessed with 35 years of marriage this past August. In December they were able to celebrate Clint’s birthday together as well as a movie date while both living in the Nursing Home prior to Clint’s passing Dec 17th 2020.

Clint loved spending time in the mountains and cherished time spent with family. He was a member of Zion Evangelical Church.  In closing, to share a bit of his wit, one time during the busy Christmas season he lost his big ring off of his finger.  When Peggy was opening her gift, she found his ring in the tissue around her gift.  Clint said “I wondered where that went”.  Peggy said “you never told me you lost your ring” and Clint paused and responded.. “I wasn’t done looking for it yet!”

The family would like to thank Worland Healthcare & Rehab Center for Clint’s tender care the last couple years and Pastor Dobson for his words of encouragement.

Should friends desire, memorials can be made to Zion Evangelical Church or New Hope Animal Shelter in Worland or any charity of your choice.

To send flowers to the family or plant a tree in memory of Peggy Eileen Wessel, please visit our floral store.